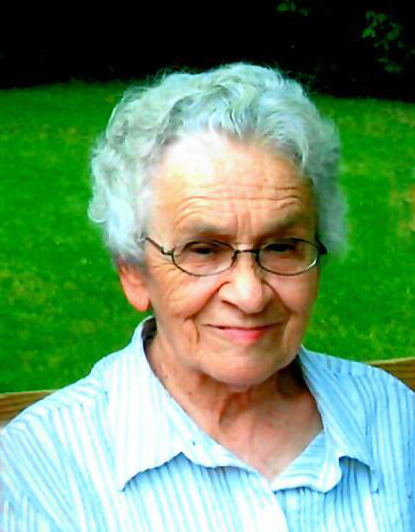 She was born on Oct. 1, 1921, in Posen, where she lived nearly her entire life, surrounded by her family with proud and loving Polish traditions and heritage.

She was the fifth child of 13 brothers and sisters born to Stanley and Rose (Rygwelski) Wozniak. Together, the baker’s dozen worked on the family farm, tending potato and grain crops, and raising dairy cattle and chickens. They were a tight-knit group who depended on one another. Throughout their lives, the Wozniak siblings harvested, canned, preserved, prepared served and shared food with and for one another—as their families expanded and grew.

Gertie graduated from Posen High School and spent some time working in a big-city factory in Detroit with her sister, Clara. She returned north and lived for a short time in Rogers City. She and her sisters did most everything together. With their daily visits in their small town, they were more than family to one another; they were cherished friends.

Gertie married her beloved husband Edward (Eddie) Dembny on April 27, 1946, at St. Casimir Church, where she remained a devout and faithful servant of God. She was a member of the Rosary Sodality and the VFW Ladies Auxiliary.

Eddie was Gertie’s everything. She was serious and stoic; he added levity to her life. They welcomed three beautiful children into the world: Norman in 1947, Ann in 1950 and Rose in 1953. Their home, located across from the Wozniak family farm on M-65 was warm and welcoming, with relatives and friends visiting continuously. They cared tenderly for multiple family members through aging and illness, and they filled every need with no expectation in  return.

Life wasn’t always easy for the active Dembny family. Their oldest child, Norman, lived with muscular dystrophy, a condition that deteriorated his muscles and limited his mobility. Gertie was an outstanding caregiver, waking many times each night to tend lovingly to her son. She and Eddie managed his wheelchair and made special accommodations, long before handicap accessibility was commonplace. Norman died in 1968 at the age of 21 and is still remembered fondly for his laughter and love of baseball.

Their daughters, Ann and Rose, recall a revolving door of cousins, many of whom considered Auntie Gertie one of their favorites. She was known in family circles for her molasses cookies and fruit pies—but most famously for her homemade bread that simply can’t be duplicated. It is said that Gertie is single-handedly responsible for raising an entire town of carb-lovers; this was passed on to future generations as well.

Eddie and Gertie were proud of Ann and her husband Jerry Tolsdorf, and Rose and her husband Paul Gryniewicz. They had five grandchildren: Shannon, Jason, Nicole, Amy and Kristy—with
whom they shared great joy, vacations, card games, celebrations and family laughter.

Sadly, Eddie’s life ended unexpectedly and suddenly in 1993, when he suffered a heart attack while dancing a waltz with his bride. Life was never quite the same.

Once widowed, Gertie lived for a while at Fieldstone Manor of Posen and the Woida senior living home. Most recently, Gertie developed advanced Alzheimer’s disease that compromised her spirit and capabilities, but she received exceptional care at Medilodge of Rogers City. The family expresses its heartfelt gratitude to the staff at these facilities, many of whom are family members themselves, and all of whom maintained Gertie’s quality of life and dignity in her final, difficult years.

Unfortunately, Gertie was recently preceded in death also by her daughter, Ann, who battled  early onset Alzheimer’s and passed away too soon in 2017 at the age of 67. Their reunion in heaven was most certainly a beautiful occasion.

Gertie was a generous soul who never uttered an unkind word. She saw the best in all people and gave everyone the benefit of the doubt. She graced those around her with a generous spirit, quiet
strength, and unfailing humility.

And the food … oh, the food! No matter how unexpected your visit, no matter what time you showed up during the day or night, Gertie magically had a delicious feast for two or 10 or 20. She knew everyone’s favorite dishes and had plenty on-hand in the giant freezer that contained goodies and treasures to share.

Gertie fed us, in body, soul and spirit. That was her gift to us. Hers was a life well-lived.

Gertie’s extended family expresses heartfelt gratitude to those who loved her and continue to carry on her legacy by showing boundless generosity.

Funeral services will be Saturday, Jan. 18, at St. Casimir Church in Posen. Visitation will take place in the gathering area of the church at 9 a.m., followed by a mass at 10 a.m. A tribute to her life will be held at St. Casimir School immediately following mass.